HSBC and Brett King – a comedy of social errors

By Neil Robinson in banking, social networks, strategy on 2 December 2013 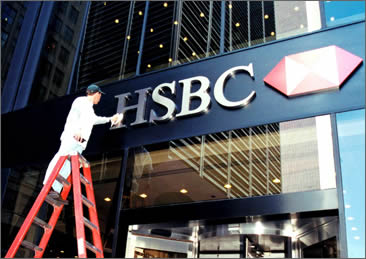 Spotted a very surprising Tweet a few days ago from prominent banking futurist and founder of Moven.com, Brett King.

He’s been caught up in a gross administrative blunder by HSBC in New York when they closed his account as part of a small business account rationalisation process.

Apparently, HSBC in the US are shifting their retail strategy away from smaller businesses and removing banking facilities from well maintained, perfectly viable customers. A bit like RBS in the UK, but without the criminal intent.

While that’s certainly a regrettable action by anyone’s standards, it wasn’t what Mr King took issue with. It was the failure to engage with the customer properly, turning a mistake into little short of a PR catastrophe.

HSBC’s action stumbled on a number of key steps. The first of which was a failure to register the change of address that Mr King had advised correctly – and recorded. This resulted in vital mail going to the wrong address. Next, HSBC failed to seek acknowledgement of their intended action. Finally, HSBC sent the monies from Mr King’s account to the wrong address, so he was unable to take receipt of his funds.

A further process failure was uncovered by HSBC’s refusal to cancel and issue a new cheque to the correct address for Mr King as the old one hadn’t been returned!

So, the stage is set for a comedy of errors better suited to a Broadway theatre than the suits of Wall Street.

Mr King, with the admirable restraint befitting someone of his experience and reputation, simply followed the normal customer channels and contacted HSBC’s customer helpline. Which is in India. That alone would send shivers of dread around anyone with experience of off-shore service desks.

Such Customer Services Representatives (what a contradition in terms that is) follow a script that they can often barely read and usually don’t understand what they’re reading anyway. When a customer has a situtaion where the resolution isn’t 100% bottomed out on that script, its doomed to end in frustration for the customer.

The dialogue Mr King engaged with is documented in full in the Huffington Post, so I won’t repeat it all here. But lets’ just describe it as an object lesson in how not to support a World-class bank’s customers.

The engagement with the HSBC service desk highlighted the failure of standard processes, the lack of escalation channels and a total lack of desire to sort the problem – largely as a result of the lack of empathy of an Indian helpdesk that cannot relate to the issues of customers on the opposite side of the globe in New York.

HSBC has recently won plaudits for its social media presence. Unfortunately, HSBC’s social team must have been too busy wrapping their Black Friday Christmas presents as no one – that’s right – no one – responded to Mr King’s concerns. Given that he’s one of the world’s most active and renowned social financial commentators and strategists – and one who’s consulted for HSBC in the past. That alone is staggering.

But the experience graphically illustrates that HSBC’s entire social presence is an empty façade. Sure, they may be active, sending tweets and handing out phone numbers for customers to resolve simple issues. But faced with a PR blunder of Watergate proportions, they failed to recognise a Weapon of Mass Destruction about to erupt on the social web before their eyes.

One further irony is that despite Mr King’s numerous highest-level connections in the social media and on-line journalism channels, none of the leading commentators displayed any apparent power to help resolve the situation. That’s a frightening discovery, If they can’t influence an outcome, who can?

As I write this, Mr King’s issue is still ongoing. I sincerely wish him a satisfactory outcome. Maybe the resulting media storm will stir the banks into action.

Anyone care to guess the chances of that?