NAB: The break up, its not what you think

No, it’s not the latest story about National Australia Bank’s recent system woes. This is something just as radical, but far more positive. 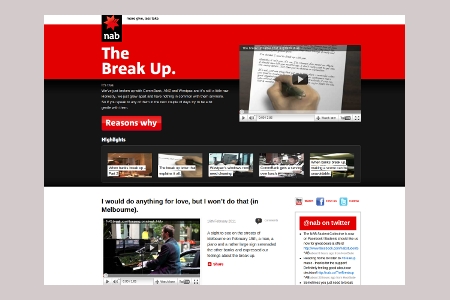 Maybe it was a realisation that NAB’s professional reputation was in tatters, maybe just a change of marketing agency. Either way, NAB’s changed course. And its a course that could change the face of Australian banking.

Do they realise what they’ve done?

NAB’s break up campaign is brave, but it carries some pretty radical implications. Embracing Facebook, YouTube and Twitter isn’t trivial. And I wonder if the NAB executives fully realise what they’ve done.

Every enterprise needs to engage with its client base, that goes without saying. But in doing so, managing the sudden and often overwhelming flow of sentiment – good and bad – is a huge undertaking – particularly when you’ve screwed up as much as NAB.

NAB has lost control of its IT systems. Successive deep cutbacks, cut-to-the-bone offshore deals and the loss of its IT management head has hurt the bank deeply. Let’s hope its ready for a backlash.

The feedback coming in isn’t going to be pretty and if they’re expecting people to just say nice things about their new campaign, they should think again.

But in the meantime, I’ll offer my congratulations to NAB. This is a brave move, that will cause you some pain, but this breakup is for the best. Trust me.