Just a few months ago, I had high hopes for what Tesco bank might achieve. Even with Fred Goodwin fan-boy Benny Higgins in charge. 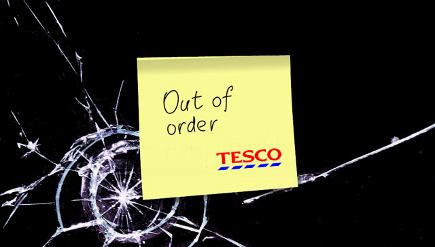 But the recent prolonged outage for so many customers has been handled badly. And Benny Higgins has shown his old-school banking colours.

Given the opportunity to show strength and courage, he chose to make excuses. Instead of holding his hands up, he chose mitigation.

Every new venture has a wobble. He could have shone, but he blew his chance. Not only does Tesco have the wrong boss, it has the wrong staff. Here’s why…

An old dog – did we really expect new tricks?

Benny Higgins is a career banker who worked alongside Fred Goodwin at RBS. Bankers in that position are usually conformist, staying inside the box.

As a declared admirer of Goodwin, Higgins was simply reinforcing that concept. He too would gather like-minded operations people around him for Tesco.

Maybe to him this seemed sensible -Tesco would take the legacy RBS systems. Doing so would maintain continuity – even if it wasn’t very innovative.

So don’t think of this new bank as Tesco – think of it as RBSco.

A double whammy for disaster

So now in Tesco, we have a new bank in many ways acting just like an old bank. Not just the old bank’s systems, but staffed by the old bank people, too.

Have you noticed how bank system failures never lose money for the bank?

They seem to be able to ensure they can protect shareholders against losses – but rarely consider customer inconvenience, while dismissing any complaints. Just ask yourself this. Why was there no roll-back to the old system on failure?

Migrating from one banking platform to another is always a very tricky operation. When its the first time, it needs tight risk management if its to succeed and not result in any customer disruption. Did Tesco put this in place?

It appears not. Tesco had an ideal situation. The new system would be separate from the old, providing an option to roll-back on failure. But in Tesco’s case, the idea of moving to its own, new platform was just too compelling.

Tesco could have migrated gradually, rolling back on failure. But it chose not to. Such due diligence costs money – and IT systems and customers share one common factor – they don’t matter to an old bank like RBSco.

Why should Tesco care if a few customers can’t see their money for a few days? They’re only customers and as a bank with RBS attitudes, why worry?

Benny Higgins performance on Friday night’s BBC Money Box was despicable. For me, I might as well have been listening to Sir Fred Goodwin.

He arrogantly refused to accept the facts clearly laid before him and relied on PR spin to smugly justify Tesco Bank’s failures. If one customer is inconvenienced – that is one customer too many – let alone the 2,500 Higgins admits.

Benny Higgins CV shows that he’s managed not one but two failed institutions – Standard Life and RBS. Now he plans to make it a third.

Tesco, you know what to do. We don’t need – or deserve – another RBS.