the checkpoint Charlies: how its the people you don’t expect who block innovation

By Neil Robinson in general, management, strategy on 15 February 2011

I was an NCR IT field engineer. Every day, my boss would hand out repair tickets. These told us what IT system problems we had to sort out that day. 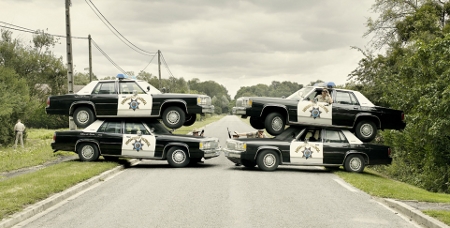 One guy had this trick. He’d keep all his old tickets. When the boss came to him, he’d draw in breath and shuffle the tickets, looking like he had a lot on.

The boss never gave the guy the urgent jobs. He’d just take the tickets he liked. He must have taught a lot of people that trick. I see them everywhere.

Keepers of the process, the emperors of the end office. The checkpoint Charlies.

A thousand ways to say no

You know, board level managers can get a bad press. Sure, they can very often be disconnected, distant even. Badly advised, for sure. But not actually to blame.

Because they rely on advice from those beneath them. And these guys can sometimes be self-serving, entrenched.

They kind of like things as they are. It may not work too well, true, it may be crap. But its their crap. So woe betide you if you mess with it.

They’ll wheel out a thousand reasons as to why you can’t do that new thing, when all you have is one reason to do it.

Because it would be good for the business.

You may have done all your homework. Built a value proposition, shown the business benefits, done a gap analysis. You will certainly have worked through the system to get to this stage.

But there’ll be someone who doesn’t want to work the system, they want to play it. They will stop you.

Losing the war of attrition

You may meet them on every point they raise. You may have the soundest logic, the best reasons. But you’ll never hear what’s said to the board behind your back. You’ll never see the coup des gras coming.

And if by some luck you win the day, it still may not get off the ground. Because that’s when they remember the lesson that field engineer pal of mine taught them. The checkpoint Charlies will just be too busy to do it.