the Internet unplugged: discovering the web’s off switch 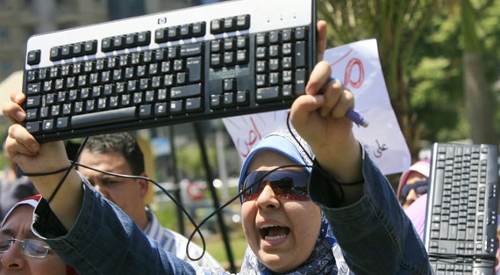 Now this isn’t a commentary about the rights and wrongs of the Egyptian unrest. This is about freedom and our right to unhindered expression.

Egypt’s demonstrated that regimes can just turn off dissent at the flick of a switch. Could we suffer the same fate in our increasingly Orwellian society?

From Google’s Chinese battles to the Internet’s neutrality and other restrictive practices, Internet censorship is a real and present threat to our freedom.

Many see Egypt just as an emerging third-world state with a dictatorial regime. But the threat to a free and impartial Internet freedom extends around the World. Take the most cynical of all Middle Eastern states, Dubai.

Dubai loves to portray itself as liberal and forward looking. Anyone looking beneath the faÃ§ade will see a state just as oppressive and corrupt as a Nazi or communist era regime.

Dubai has an Internet City, DIC, that is home to many global technology players such as IBM, Microsoft, Oracle and HP. yet no Internet line – not one – is allowed to pass out of its Disneyland-like buildings without government monitoring.

Facebook and Twitter are restricted. Even Blackberry communication is banned. Yet greedy westerners flock there to soak up the luxury and lifestyle, quite willing to turn a blind-eye to unsavoury state control and serf-like worker slavery.

Even India. Despite many western companies with call centres or outsourced operations there, the state controls all Blackberry and data communications.

The US has control over its main providers, too, although we’ll never see the true extent to this, thanks to the CIA and NSA.

The EEC’s broad legislative framework could control partner communications far better than in an independent Europe, but currently doesn’t do so.

Denmark, one of the most liberal states in Europe has recently put in place controls. Ironically, in the wake of Islamic unrest over its free press.

Who’s fingers are on that button?

I’ve worried for a while about the security of the network that supports the Internet. But dark fibre and buried cables aren’t very sexy and rarely make the headlines.

Its time to discover those fingers on our Internet switch before its too late.

Sliding away the stone to uncover what lies beneath

We tend to visualise the Internet as an amorphous cloud, or infinite cyberspace. But the Internet is tethered to the ground at a number of points in every country.

These anchors are called Points of Presence or POPs and are protected like bank vaults from external threats, but that isn’t where the real danger lies.

The real danger to our freedom lies inside that fortress. Our own state rulers.

Too big to fail us?

LINX manages Internet connectivity in the UK. Its supposed to be neutral, but is overseen by the Government’s Department for Trade and Industry (DTi).

If the government so desired, it could bring pressure to bear to force compliance. Our government’s authority over LINX is greater than that over the judiciary.

Not in the public – or our government’s interest?

Under the current system, it would be easy for some faceless Whitehall mandarin to decide that something wasn’t appropriate for us.

Could there be more to the cosy relationship between Vodafone and the State?

Does that explain Vodafone’s more-than-favourable tax position and its assured presence on the annual Honours List?

Paranoia or simply protecting our freedom?

Just because you’re paranoid doesn’t mean the Government’s not out to get you. OK, we can joke about such things. But are we really sure we couldn’t be plunged into Internet darkness like Egypt at some stage?

Maybe now’s a good time to start asking questions about our own freedom.