I enjoyed one of those Twitter engagements this weekend. Well, I say enjoyed, maybe more like the engagement one has with the front of a speeding train.

It got me thinking about Socrates. I’d bet he’d love Twitter. Lots of sophists online. 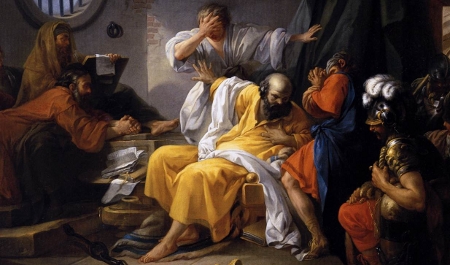 I’ll tell you a bit about Socrates. He questioned everything and accepted nothing. For him, truth was its own reward. His philosophy put him up against the sophists.

Sophists earned a living selling their own “truth”. You weren’t meant to disagree.

So what can Ancient Greece teach us about Twitter? Glad you asked me…

Socrates – it ain’t necessily so

We don’t debate, despite the infinite platform the Internet provides. We Tweet. Twitter’s isolation lets us offer opinion as absolute truth with total impunity.

Our twittering sophists are right not because it is so, but because they say its so.

Its what the Dilbert cartoonist Scott Adams describes as a confusopoly.

I’d love Socrates to be there, ready to question their logic – and their motives too. Socrates would mess with the sophists minds. Not for reward, but for the truth.

A J Marr’s excellent article about Socrates and the sophists is well worth a read.

A prolific Twitter sophist I’m often drawn to take issue with is one bankervision. His conviction in his absolute infallibility and ability to “get it” is almost papal.

Maybe I see Twitter a little Socratically – before I’m castigated by today’s sophists – let me say its Socrates’ attitude – not his great intellect I lay claim to!

Drop the self-obsessed, pseudo-infallibility of sophism to consider – just once – that its just possible you’ve got it wrong?

Counter an argument by questioning, rather than by dismissing it out of hand. Sometimes a question is a powerful thing. Socrates thought so, anyway.